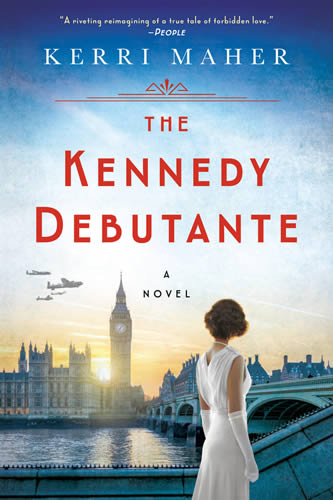 A captivating novel following the exploits of Kathleen “Kick” Kennedy, the forgotten and rebellious daughter of one of America’s greatest political dynasties.

London, 1938. The effervescent It Girl of London society since her father was named the ambassador, Kathleen “Kick” Kennedy moves in rarified circles, rubbing satin covered elbows with some of the 20th century’s most powerful figures. Eager to escape the watchful eye of her strict mother Rose, the antics of her older brothers Jack and Joe, and the erratic behavior of her sister Rosemary, Kick is ready to strike out on her own and is soon swept off her feet by Billy Hartington, the future Duke of Devonshire.

But their love is forbidden, as Kick’s devout Catholic family and Billy’s staunchly Protestant one would never approve their match. When war breaks like a tidal wave across her world, Billy is ripped from her arms as the Kennedys are forced to return to the States. Kick gets work as a journalist and joins the Red Cross to get back to England, where she will have to decide where her true loyalties lie—with family or with love…

Praise for THE KENNEDY DEBUTANTE

“A riveting reimagining of a true tale of forbidden love.”
– People

Bursting with vivid details America and London during wartime, this is an enthralling take of a bold woman eager to make her mark on the world”
– Woman’s World

“… an engrossing story of forbidden love, World War II, and a legendary family. Are the Kennedys cursed? You decide. “
—Refinery29

“… a delight to read … Maher captures the chaotic love, loyalty, and devotion of the huge Kennedy clan.”
—Historical Novel Society

“A “well-paced and engaging novel” that will “appeal to fans of TV’s Downton Abbey.”
— USA Today

“This immersive, rich portrait of a complex young woman from one of the world’s most famous families will hold readers in thrall. “
— Publisher’s Weekly

“In Kick, Maher has created a likeable, occasionally naïve heroine who will intrigue readers who might be unfamiliar with this member of the Kennedy clan. While the book’s closing chapters will necessitate tissues, and readers familiar with Kick’s fate will find the ending bittersweet, this is an engrossing tale of the importance of family, faith, and love in the life of one remarkable woman.”
— Booklist

“Maher paints an immersive picture of America and London during wartime, full of remarkably vivid details…. Kick emerges as an immensely likable character, and casual readers and history buffs alike will love getting to know her. Her headstrong, lively personality propels the book forward…. Maher shows the true cost of war, both for those fighting and those left behind. A romantic and heartbreaking look at an often forgotten American figure.”
— Kirkus

“Kerri Maher has crafted a compelling, insightful look into the complexities of the Kennedy era and one of its most fascinating daughters. Expertly researched, this is a remarkable debut.”
— Susan Meissner, bestselling author of As Bright as Heaven

“An outstanding deep dive into a fascinating person and time. For fans of The Crown, the riveting story of a headstrong American girl captivated by a dashing British aristocrat. I’m blown away.”
— Fiona Davis, national bestselling author of The Masterpiece

In Maher’s masterful portrait, Kick Kennedy is a bold young woman living at a precarious moment in history, eager to make her mark on the world as fearlessly as she will follow her heart.”
— Julia Glass, author A House Among the Trees and the National Book Award–winning Three Junes

“Maher offers a dazzling glimpse of London society filled with a rich, nuanced, and infamous cast of characters alongside a poignant depiction of the emotional cost of war. A stunning debut!”
— Chanel Cleeton, author of Next Year in Havana

“Maher beautifully mixes the red-blooded American iconography of the Kennedys with the delicious and Downton Abbey-esque grandeur of Britain’s upper crusts. Maher’s heroine proves a poignant and captivating subject, and her story will make your heart lurch in the best possible ways.”
— Allison Pataki, New York Times Bestselling Author of The Accidental Empress